In this village you mostly find an old generation living..But something is new .people of this village very simple and lovely. The language speak by people is mostly baagri (rajasthani) and hindi.You will find many rich men. But hardworking in field area and other. Called by other that in lalgarh jattan all types of people live and do hardworking .People believe in GOD. And go to temple morning to evening. And evening to morning. And evening to morning .People of this village like to eat sweets (make in self home). kheer , seviyan , dokhlaa , etc.and kadi,daal. 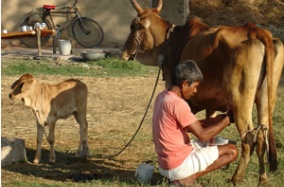 The old men used to wear pyjama-kurta.and like playing "chess".Youth of this village very aggressive and do something is new. Youth used to wear jens, t-shirts.but mostly young used to wear formal dress pent -shirts. The common dress of the women constitutes (i) Sari or Odhani, (ii) Kanchli or Kunchuki or Choli (iii) Ghaghara or Ghaghri or Lahanga Besides, the women of high status and ranks wear dupatta and patka. The use of chappals or sandals or jutees is also common but ladies of high families use colored sandals studded with gold threads and stars. Thus, it is concluded that the costumes of women are very colorful and fascinating.

In olden days, the profession of the people decided their caste. This system has now been broken. Today, individuals have the freedom to opt for any profession irrespective of caste.

The profession based caste system has now been transformed into birth-based caste system. People of various castes and sub-castes reside in Lalgarh jattan.... There is a large group of agricultural castes to be found in lalgarh jattan...These people depend on Agriculture for their livelihood. Some of these castes are Jat, kumawat , saith etc. Irrespective of the birth-based caste system, each individual is free to follow the profession / occupation as per choice, in modern lalgarh jattan....He use of ornaments dates back to the prehistoric times with the passage of time new designs and varieties replace the old ones but still there are ornaments which were used in the past and are still used in the present.

Both men and women wear ornaments but with the passage of time, men are giving up their use. The ornaments of gold and silver are more prevalent in Lalgarh jattan.There are certain ornaments which are used by men. In daily use the ladies wear normal ornaments of neck, hand, nose and ear but on special occasions and social functions women wear all the ornaments of to look beautiful and attractive.

The religion and costumes of the tribes vary. They each have their own religion, costumes and profession. The religion followed by Rajasthanis, in general, is the Hindu religion. Various other religions are also prevalent. Some of these religions are: In OBC caste Include Many Old Time Caste Such as (Jaat, Kumhar, Bishnoi, Jain, Arora, Baniya, Aggarwal, etc.........) Muslim Caste Also Lived in this village...